Skydiving legend Rook Nelson is many things to many people. He’s a stone-cold, multi-medalist, multi-disciplinary competitor, owner of one of the biggest, most important skydiving dropzones on the planet, world record organizer, musician and all-around popular guy. He’s been such a feature on the skydiving landscape for so long that you might think – hey! – you know everything there is to know about Rook Nelson.

With all due respect, we’re here to tell you you’re wrong.

We sat down with Rook not long ago to find out some of his favorite kinda-sorta secrets, and we weren’t disappointed. So, without further ado, here’s a quick peek into the inner world of the amazing Rook Nelson.

Rook and his wife Heidi welcomed their first child, Rocket Nelson, a month and a half ago.

“Most people found out we were having a son through an article that Sunpath wrote about me,” he laughs, “because we didn’t announce it to anybody. You want to make sure everything is all good before you make that kind of announcement, right? Well, when they did that interview, they asked if we were going to be growing our family and I responded saying yeah, I’m going to be a dad soon.”

“It was funny to see the responses,” he grins, “But I’m not really outspoken. If there is nothing that needs to be said, I don’t say anything. It wasn’t like we were going to do this big reveal or anything like that.  Heidi and I have our private life. We live on the drop zone, and we spend a lot of time with our friends and clients, but there are certain things we don’t need to go over the top with, and we felt that was one of them.”

2. Rocket’s probably going to be a musician. It runs in the family, after all.

Skydiving and good eatin’ aren’t the only two values that have trickled down the Nelson family line. If you’ve been to any really epic skydiving party in the last few years, you know that the best of them tend to feature Rook Nelson at the tables.

“I love djing and electronic music,” he explains. “Growing up, I always knew I would own a set of turntables. My dad was a hobbyist drummer, and he got pretty good at it. He never played in any bands that I know of, but he was pretty good. I followed that progression into today’s era, DJing, electronic music, and beatboxing; going along the same lines. I ebayed a set of turntables a bunch of years ago and I still have both of them to this day.”

“At the time at the drop zone,” he adds, “it was motivating and fun and something to do versus sitting at a bar drinking. I liked that we could dance and spread a vibe. All DJs have their style, but I’m from Chicago where Chicago House was born, and that’s what I bring. I’ve never done it for hire. Only for a deserving party.”

If you’re a savvy skydiver, you may have heard of Vertical Elite – the team that’s coming together to do the aforementioned world vertical record in August. What you may not know is that it’s about to be the subject of Rook’s next creative venture.

“We have never coined it a team name before in the past,” Rook explains. “I did this year to give it some recognition.

What I wanted to do is highlight some people coming through for the very first time and showcase these guys and their first-timer journey. I want the people on the couch that doubt their skills and don’t think this kind of success is obtainable to identify with one of these six people, get off the couch and come try. So we follow that drama. Some people have gotten invites and some haven’t. There’s some reality; some narrative. This kind of thing has never been done in skydiving before, and I always like to be that person that does it. We’ve just launched episode 2, here!

He went to culinary school for two years – which you probably wouldn’t know if you haven’t been lucky enough to come over to the Nelson house for a home-cooked meal: typically, a steak au poivre with a peppercorn sauce and a little, melted Gorgonzola served on a garlic baguette. No big deal.

“My mom was an excellent cook and cooked 90% of our meals growing up, which is rad,” he explains. “When I moved out of my parents’ house, I didn’t want to eat fast food all the time. I never thought I was going to be a restauranteur or chef; I just didn’t want to have to eat crappy food. I worked it out so I went to culinary school for half of the day during my junior and senior year of high school, which was fun. When I would come back to lunch at the high school, I would have something awesome while everybody else would have whatever the old ladies gave them on the tray.”

“I enjoy production – “the show must go on” – which is a big thing that they teach you in culinary schools because it’s a big deal in professional kitchens. In the food industry, you get a lot of that production vibe. I still use those skills today, because – say at the World Meets or Nationals or Summerfest – it is a production. I enjoy that kind of environment; the idea that the pressure is on and you have got to make it happen. I like that style of work.”

Rook has co-organized eight vertical world records. He and the team are doing their 9th in August. Aside from those, he’s got a handful of RW records under his belt, as well as a handful of sequential records and a handful of National records (most points turned in a block sequence, to be specific).

“In any world record I do, there is always fear,” he says. “But not for myself. For other people getting hurt. When I’m setting the stage at the beginning of every record I organize, the very first thing I say is this: The first goal of this record is that everybody goes home at the end of this. The second goal is to get a record. I don’t want to have to call anybody’s parents. I care about the safety of other people more than the rest of it.

6. In fact, he cares about everybody.

According to Rook, he had a lightning bolt realization back in 2010, when the earthquake devastated Haiti: They needed supplies. He had planes.

“What is weird is when you put something in motion, a bunch of things fall into place,” he recalls. “I was working with Agape Ministries and they somehow found out I was going down. They filled the airplane. I did 3 or 4 trips for those guys. We were bringing 4,000 pounds of relief stuff down there, everything from water, to toilet paper to medicine – everything.”

“After that, we felt we had done our job,” he continues, “But then flash forward to the hurricanes.  Nick Barson contacted me about post-storm animal evacuations from Puerto Rico. We’ve flown down there to the island every year for the boogie for a decade, so we know the routes and have the infrastructure to do that flight. It was a no-brainer. It felt rewarding to me to bring back those cats and dogs to their owners and relocating all those shelter dogs. Supporting Nick’s effort with a really good rate felt like the right thing to do. A lot of the pilots donated their time, too.”

“I don’t do it for the praise,” he concludes. “I do it because if I was ever in need, I hope it would come back around and if you have the ability to do something, you should do it.”

7. He hates nothing more than a job poorly done.

The Mondial hosted at Skydive Chicago in 2016 was one for the history books. You ask anybody who went – the extraordinarily complicated in-air ballet went off without a hitch and sunset reliably brought a fantastic party on the ground. It was a masterpiece. 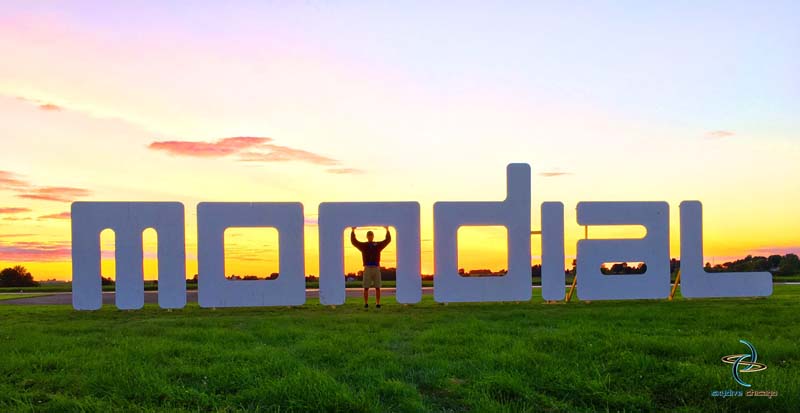 Rook insists that he has always wanted to host a Mondial, but the final tipping point came for him out of exasperation.

“I think the motivation came for me to host a Mondial because I’ve been to some really crappy ones,” Rook laughs. “I know that skydiving isn’t an Olympic sport, but come on. I’ve been to a World Cup where they spelled the word ‘world’ wrong on all the materials, including the trophy. I thought, Hey now, I have spent my entire year training and have dedicated my life to this, and they spelled the trophy wrong. I’ve been to a world meet where they had no PA system.”

As a long-time competitor himself, Rook prides himself on running keenly competitor-focused events. He’s been on this beat long enough to see what works and what doesn’t. And over the years at Skydive Chicago, he’s built a smart, skilled, like-minded team that’s poised to deliver exactly what works – specifically, what really sweeps people off their feet.

“I love to surprise people,” he grins. “For example: One of the most challenging things we do with Summerfest is to recreate that event so that someone coming for the second, third or fourth time feels like they are coming to an entirely new event. We’ve been doing the event for 17 years now, and we work really hard to keep it fresh.”

“Putting on a good event just takes stepping back and designing something you’re proud of,” he insists. “I’ve instilled this into my staff. When you are done with something, step back and say, does this make sense. Works every time.”